(Definition of Metric – Skimetric – Standards of measurement by which efficiency, performance or quality of a process or product can be assessed).

Skimetric is a unique, world leading process to improve the symbiotic relationship between a skier’s physiology and their equipment. This process developed by Adalbert Leibetseder with the help of eight leading specialist in related fields, is highly detailed, highly structured and highly customised to meet the specific needs of each client. It produces extraordinary results and is based on years of experience and rigorous testing and measuring.

All of his life Bert Leibetseder has had an obsession with excellence. As a champion skier and product trainer in his own ski equipment distribution business (see below) he has spent a lifetime perfecting not only his skiing but also his equipment and the equipment of such well known companies such as Carrera.

Bert realised that no-matter how good a skier you were, if your equipment did not work in harmony with your physiology the outcome was going to be below standard every time. Bert knew that many skiers were receiving less than adequate or incorrect advice, the wrong equipment and worse, poor fitting of boots and skis leading to pain, increased fatigue in skiers and possibly an increased potential for injury.

Skimetric’s commitment is to continue researching and developing the optimum technology for skiers so that they will achieve outstanding results every time. We will continue to provide a level of personal service and solutions to each individual skier that is unmatched in the industry. Our goal is to help you achieve your unique skiing goal.

How The Process Works

Here is an overview of Bert’s process. The fine details of the Skimetric process must remain confidential as many of the elements used by Bert to achieve his remarkable results have been fine tuned over many years of research, trial and error.

This extraordinary attention to detail, both in terms of customer service and in terms of technical service needs to be experienced in person. Some of Bert’s tools, techniques and strategies are secret and we are sure you will understand the reasons behind that.

The Skimetric process is so thorough, so radical, so detailed and achieves such extraordinary results that Skimetric has begun to attract customers like two time Olympian Jono Bauer, one of the best Australian ski racers of his generation. Skimetric also attracts skiers of all skills levels from around the world who simply want to experience a seismic improvement in their comfort, skiing performance and endurance.

Today the client list includes the worlds fasted ski racers including existing and ex- World Champions who have between them 58 World and Olympic medals (by 2015), some of the most successful business people in the world who are globally renowned figures at some of the worlds most successful companies, extreme skiers at the top of their demanding profession and celebrities from around the globe.

We have also had tremendous success working with People with serious foot and leg injuries from accidents who can ski again and improvements to Individuals with Parkinson’s and Mitochondrial disease.

What Does The Skimetric Client Experience? 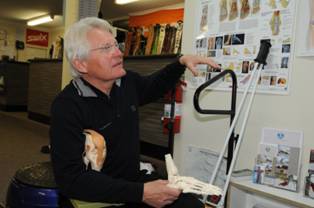 Firstly Bert will do a preliminary assessment to determine if and how Skimetric can benefit you as well as what level of work is required.

Initially Bert will follow you on the slopes with a video camera, filming you from all angles before returning to his premises. After watching your video and explaining your areas of strength and weakness he explains where some of your challenges lie in easy to understand terms, often using models of joints so that you know exactly what is happening to your physiology as you ski.

Skimetric technology is based on precision, integrity and positive results without compromise.

The process provides a level of dynamic balance/equilibrium and a skiing experience with Bert’s personal touch that cannot be duplicated. The reason this cannot be duplicated is that Bert leverages a high calibre international Skimetric advisory panel (click here).

This team of renowned experts IS UNIQUE and they provide hands on practical experience in all aspects of the sport. Bert “practises what he preaches” and this has ensured that this process has been developed, refined and honed over many years. 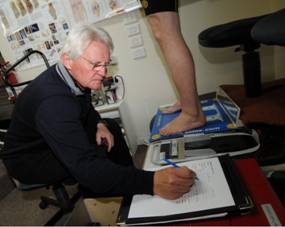 Bert then begins a series of intricate measurements to build a three dimensional picture of your foot. This process is a skill in itself and goes way beyond a“measurement” process common at this present time.

Certain machines, instruments and tools are custom built for the purpose (Skimetric precision Instruments) and in the hands of an expert like Bert they help to create incredible results.

This exacting process has one simple outcome: To create the perfect relationship between the skier and his equipment so that each individual skier’s equipment works in perfect harmony with their unique physiology. 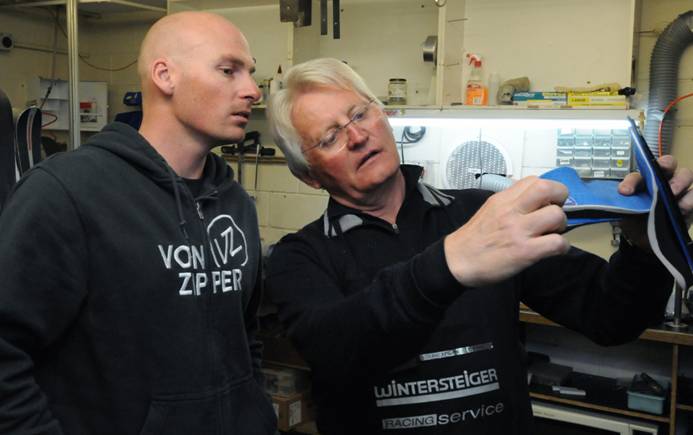 From this point onwards often a new interior for the boot is constructed as well as a Skimetric foot bed and numerous other related equipment improvements are made. Each and every change is designed to work perfectly with your whole body and to enhance your skiing. Often Bert will take you back out on the slopes, watch you ski again and if necessary take your boots off and fine tune them again until he believes he has achieved the optimum outcome for you.

The final stages of the process often include re-training to ski in the new set up. Old bad habits and old bad muscle memory is overcome in only a short period of time as the body realises that the correct skeletal position has been achieved (often for the first time ever for some skiers). This allows the Skimetric graduate to ski better than they ever have before with a set up and position that absorbs the forces of skiing efficently.

Here are just two photographs of a lady skier, note the massive improvement in stance and leg shape achieved during the Skimetric process: 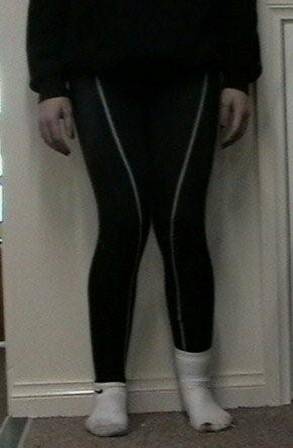 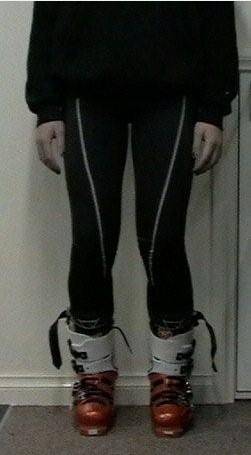 Skimetric continues to win friends and praise primarily due to word of mouth. Skimetric customers have been so impressed that they have naturally talked to friends and other ski enthusiasts and each and every season the business has grown.

Here is just a small sample of articles that have appeared in the press either about Skimetric or articles that Bert has contributed to himself.

Salvation in a boot written by Hilary Doling 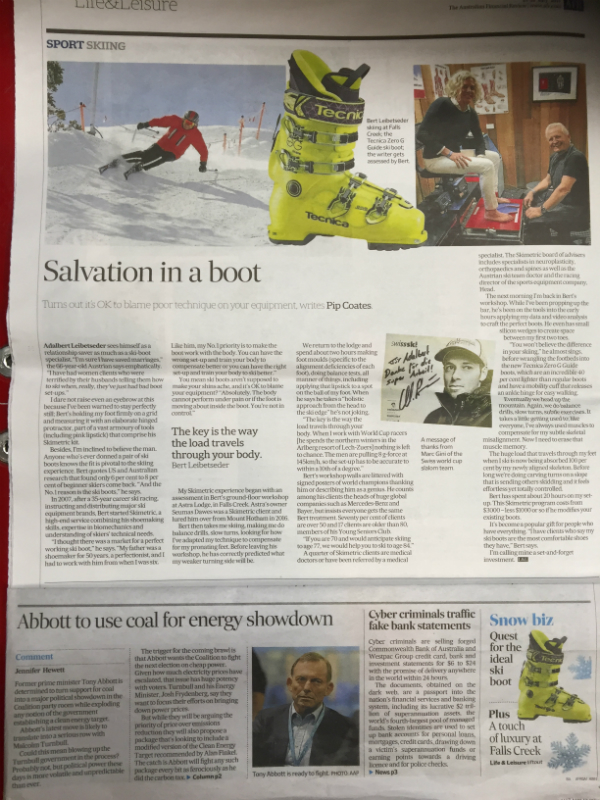 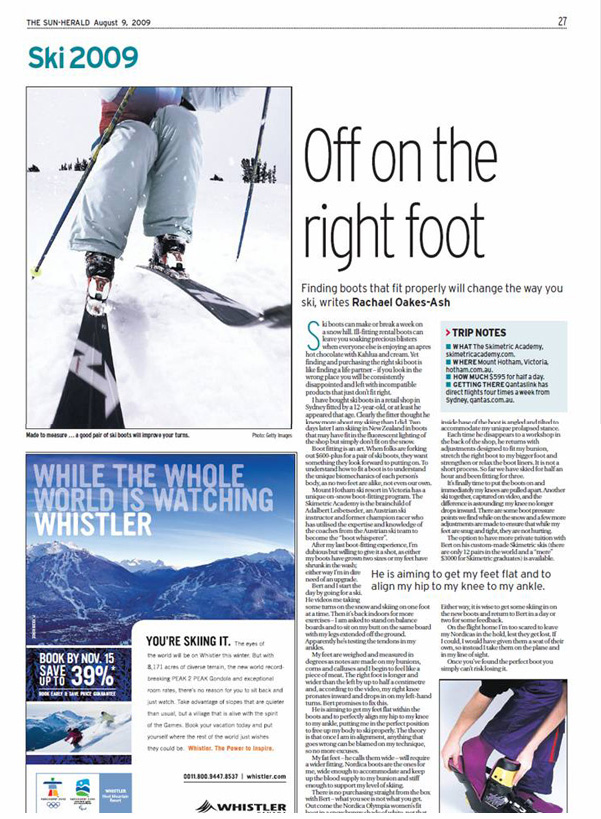 This Article Appeared in the May 2010 Issue of Great Health: 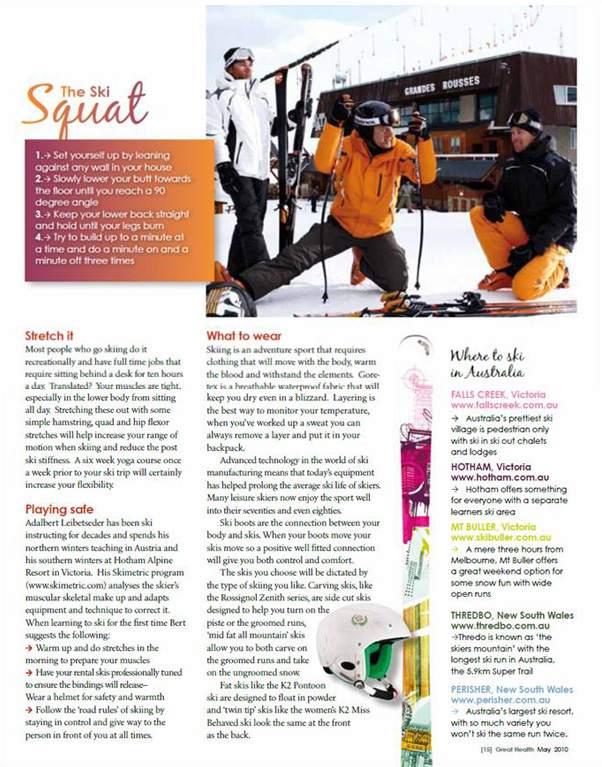 Adalbert Leibetseder is a passionate man. An extreme perfectionist by nature, he is fascinated (you might even say obsessed) by the desire to transform every skier who walks through his door into a skier who can perform at the absolute peak of their ability.

The problem, he believes, is that each one of us has a unique body alignment which means that we all stand differently on ski equipment that is mass produced.  The solution, he says, is “to bring ground zero up to the level of the sole of the foot”.

Adalbert’s method is threefold.  Firstly, he analyses our natural stance and balance on each foot, and our current skiing style.  Toby stood in a variety of positions, on both feet and then on each in turn whilst Bert took notes.  Then they went outside and skied one run together.  Bert watched Toby from every angle and recorded his turns on video.

Secondly, he counters any anomalies (and most of us have them!) in our alignment using supportive remedial aspects and ski-specific custom footbeds so that every one of us stands on our skis with the same perfect alignment.  He guarantees this to within 1/10 of a degree.  Toby’s right foot was 2.5% pronated and his left foot 5%.  After Bert had finished creating individual platforms for each of Toby’s feet, Toby felt unstable in his new position on his skis.

Finally, and crucially, Bert then shows us how to ski again.  Our muscle memories have spent as long as we have skied compensating for our structural imperfections and Bert takes time to help retrain our confused muscles to the newly adjusted position in which we no longer need to make unnecessary movements to compensate for our natural misalignment.

Toby is an expert skier, but for the first few turns he looked like a beginner.  That didn’t last long though.  Pretty quickly, his muscles adjusted to the new set-up and realised that they actually had a far easier job now that the correct skeletal position was going to absorb the forces of skiing for them!

I used to be able to carve as fast as Toby.  Now I can’t.  The Skimetric programme has bumped him up to another level: he actually now looks like a professional ski racer…

…and I am booked in for the Skimetric treatment at Mount Hotham in a month’s time.

Often it is something very tiny which prevents us from being the best we can be.  An ever-so-slight pronation of one foot for example, which weakens the left hand turn. But in Bert’s hands, these kinks can be ironed out; and the results are dramatic, whatever your level of skiing.  Bert’s own skiing style is flawless, making him a compelling advert for his own programme.  Over the last 40 years he has clocked up a stunning array of racing wins and instructing awards in his native Austria, the USA and Australia.

Why You Are in Safe Hands 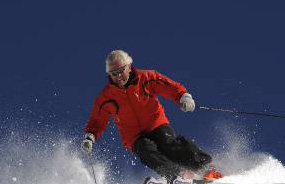 Bert holds a hon.PhD in sports technology has a successful ski business background and is widely recognized as an expert in the field of winter sports. He also conducted market surveys for Carrera International in Japan and China and set up the distribution in New Zealand and Argentina.

The Carrera Ultrasight ski goggle lens concept was voted in 1989 best new product at the Australian Ski Awards, is being exhibited at the Sydney Powerhouse Museums database of Australian inventions and is featured in the book Tomorrows World – The Australian Initiative.

International grade representative for Austria in skiing and soccer

Co-ordinator of the Australia One and Two teams to enter world’s longest giant slalom ski race.

Visited and trained in the Austrian ski team training centre (Olympiastuetzpunkt Obertauern) for 5 years and introduced the Worldcup Team to the plyometric Skiers Edge fitness machine.

The supply of ski equipment which may be required or Lift tickets is not included in the program price. A total cost estimate will be given prior to the commencement of the program.

Subject to confirmed appointments and ski resort operations, the Skimetic progam runs until the end of August in Australia and the end of March in Austria.

To Find Out More About How Skimetric Can Help You Simply Contact Us:

Use the following e-mail to ask us questions or book your appointment with Bert.

Copyright © 2007 – No part of this information, Process, Products and Technology may be reproduced by any person without the written permission of Skimetric.

How Skimetric Works For You 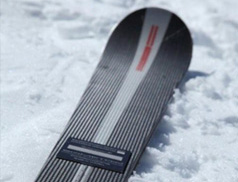 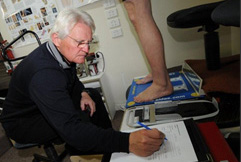 Find Adalbert at the Home of Skimetric Austria & Falls Creek Australia, where every guest is treated like a celebrity. 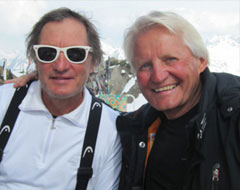